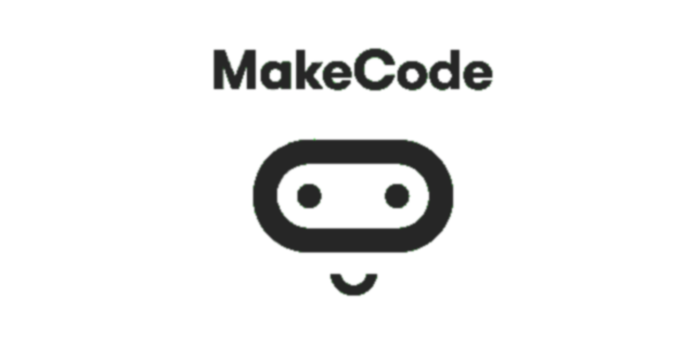 We encounter motor skills issues (slower reaction time, clumsiness and inability to perform certain activities) almost daily. Many of the jobs today require a steady hand. For example, architects, welders, dentists and surgeons must have a “steady” hand for their work to be successful. Motor skills issues are especially pronounced when it comes to the non-dominant hand.

Researches show that 96% of the world population uses their right hand (are right-handed). For the majority of these people, the left hand is completely neglected, and they are unable to perform many activities which require precision with this hand.

One of the ways to overcome this issue is the device called the Wire; with this device, a person can practice motor skills by receiving feedback on the level of success of task execution. With the assistance of this device, everyone can practice their concentration and fine motor skills. Depending on the feedback, the user can determine whether he or she is dexterous, or whether there are some motor skill issues and more practice is required.

For the construction of the Wire device, you will need:

In order to make the Wire device, first, we have to make a device comprised of the wire on which we can practice our motor skills, wooden (or some other) base and Micro:bits. 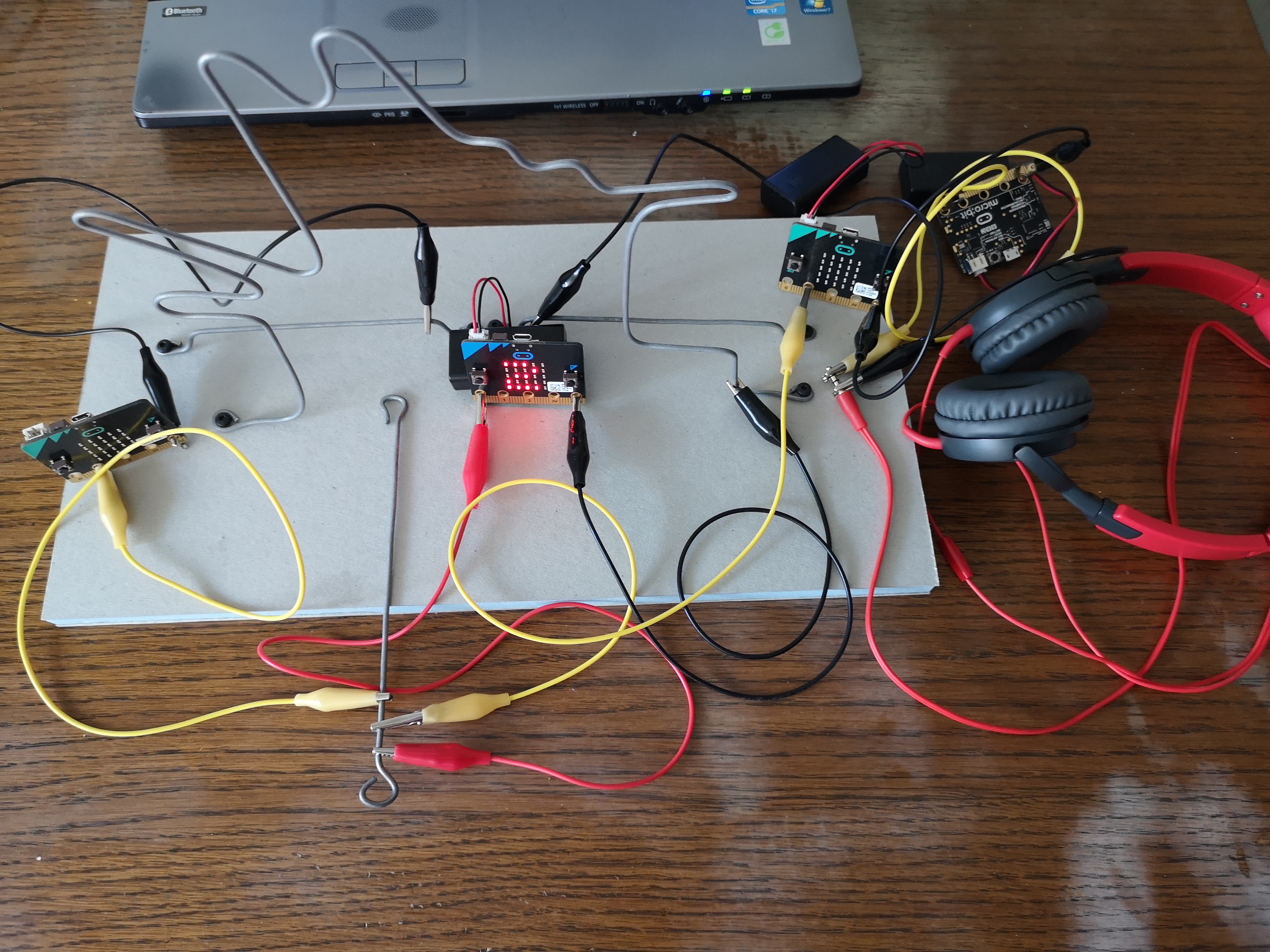 Now that we are familiar with the basic characteristics and components of the Micro:bit, we can proceed with the construction of the Wire device. We should connect Micro:bits using crocodile clips to the configuration mentioned above. We will connect the first Micro:bit by connecting the grounding (GND) to the wire, using crocodile clips. The figure below shows the connection between the grounding and the Micro:bit (only for one device). 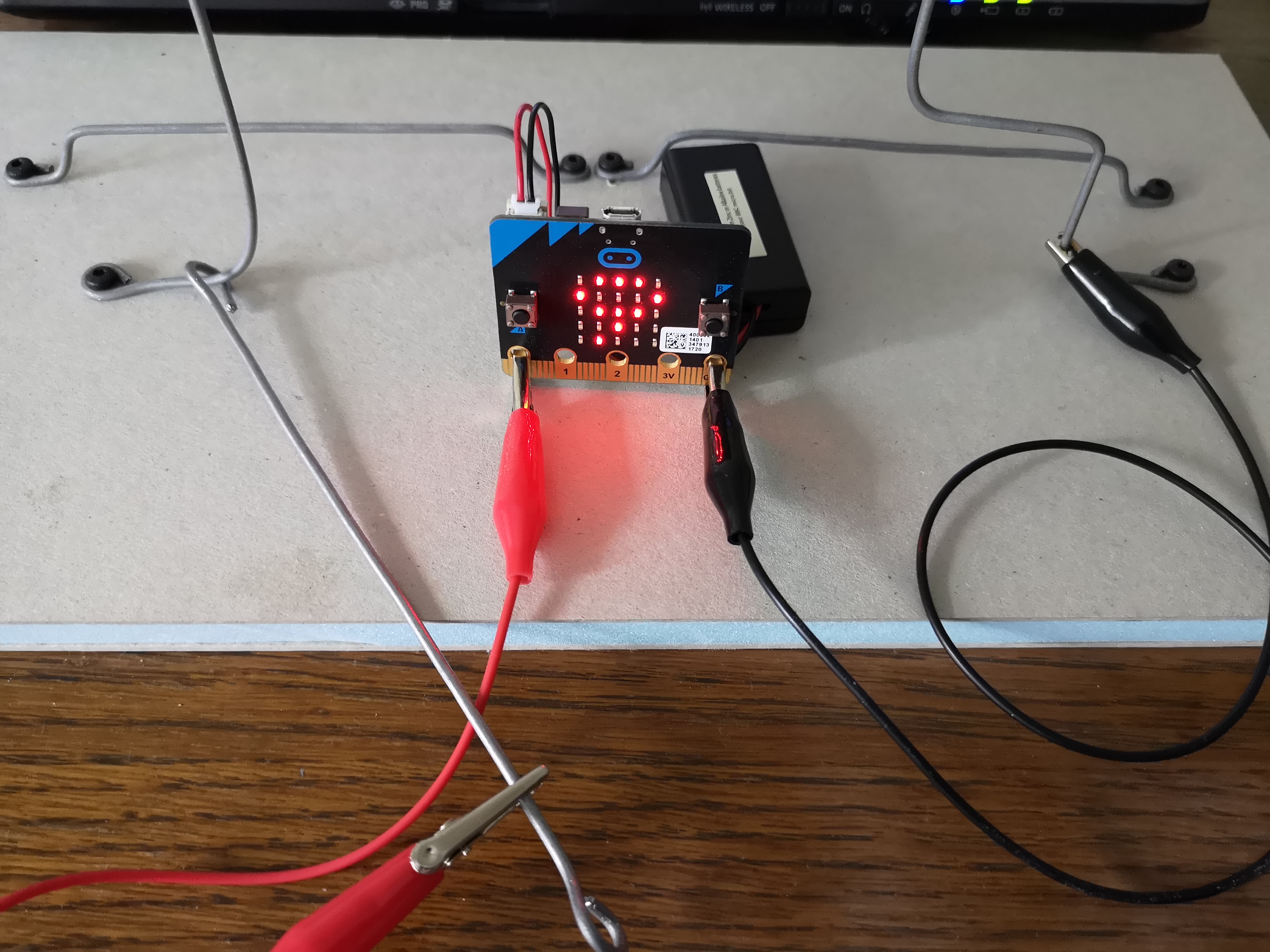 Additionally, we have to connect the Micro:bit with the part of the device which tests motor skills (hook). Once the “Wire” device is constructed, it is time to create programs for each Micro:bit. 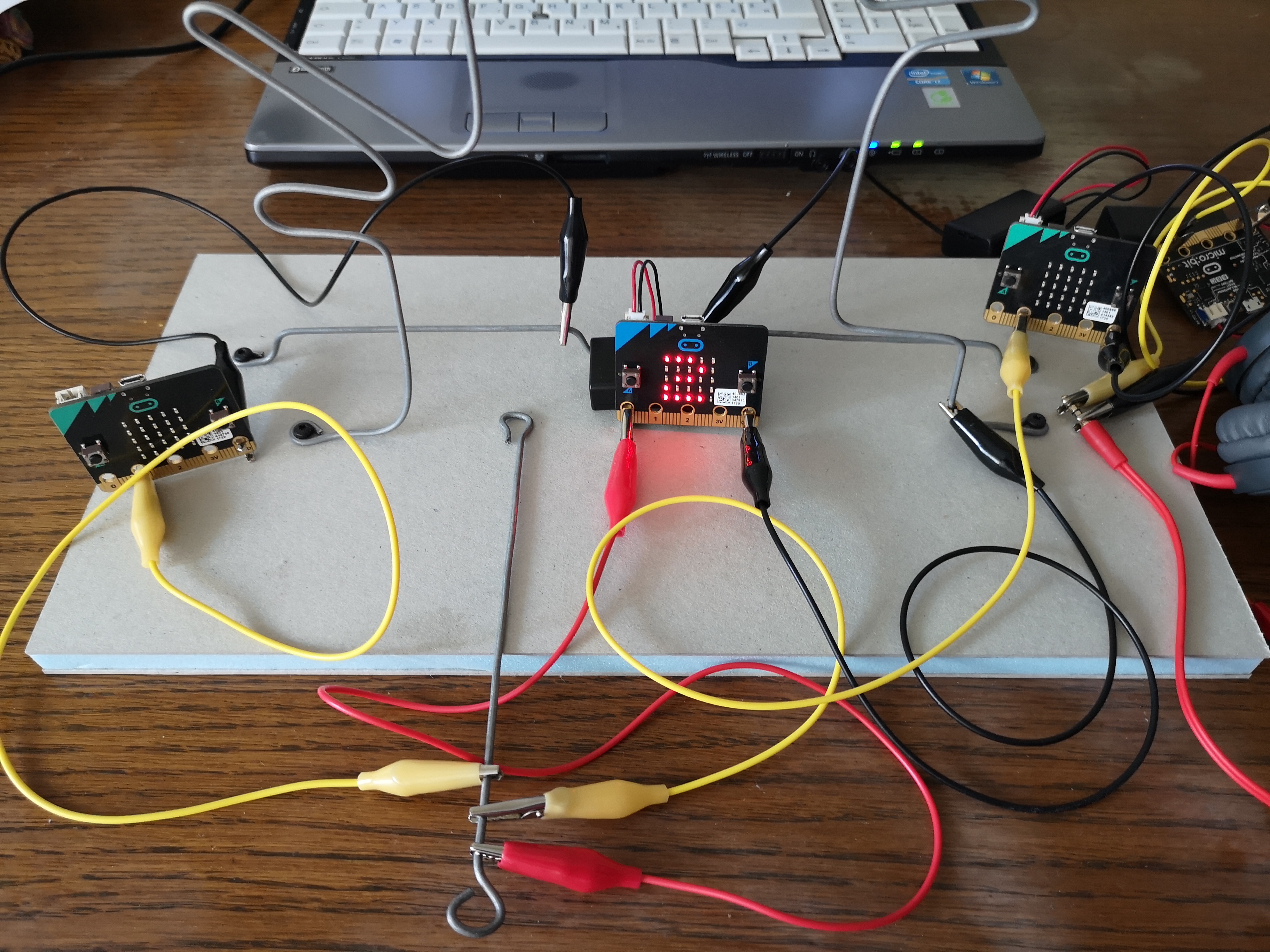 Each of the four Micro:bits has to be programmed individually: ­ 1. ­The first detects and counts the mistakes made by the user 2. ­The second starts the time 3. ­The third measures the time 4. ­The fourth makes a sound when the user makes a mistake.

Create a new project. Now, we wish to program mistakes detection, more precisely we want to detect, using the Micro:bit, when the hook touches the main wire. Based on the physical Wire device, we can conclude that the pin P0 is the “trigger” for all events.

Since the P0 pin is connected via the crocodile clips to the hook, the mistake is detected by touching the main wire and the Micro:bit should display a cross (we are programming mistake detection).

This block will be our “trigger” for the visual display of the mistake.

Now, we have to add the block displaying the cross sign on the screen, which will appear when the user touches the main wire with the hook. Choose the category 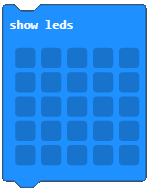 The look of the code and the mistake simulator: 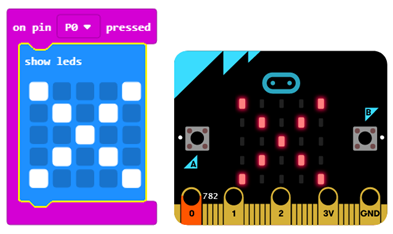 In the code, we will add the block for pause with which we ensure timely system response (Wire device). Choose the category 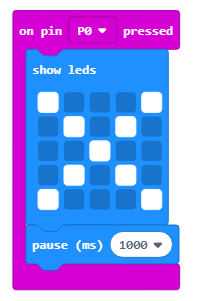 The upper part of the code only shows the detection of the mistake that happens when the hook touches the main wire.

Now, we shall add the part which will count the number of times the user has made a mistake. To fulfill this requirement, we have to find a way to store and, if needed, change the number of mistakes the user makes. Solution for this problem is the introduction of the variable.

A variable can be understood as a space in the computer memory, something like a box, in which, during the execution of the program, we can store some interim values. Variables have names. When we want to use the value of the variable, it is enough to use its name.

A variable is created in the following manner, in the category Variables (1), click on the button Make a variable (2) and type in the name of that variable in the field (3), in our case the name Counter. By clicking the button OK (4), you have created a variable (5). 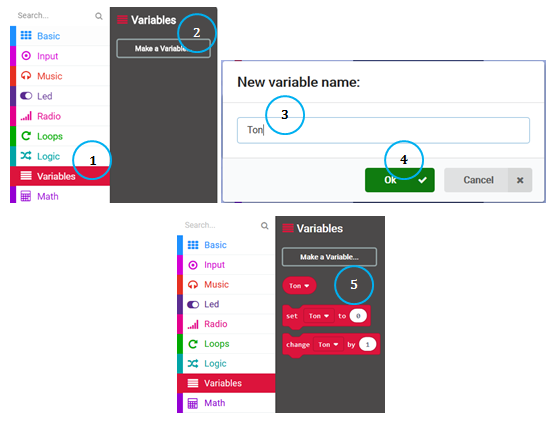 This block will be our “trigger” for resetting the variable Counter.

From the Variables category drag the block

We will connect this block to the block above and with the block displaying the value of the variable. (From the category

we choose the block

into which we will drag the block

from the Variables category, and place it in the space with the number 0 written. This way, we create a block that shows the value of the variable Counter.

Part of the code for resetting and displaying the variable Counter:

We can use the variable Counter, whose starting value is set at 0, to count the mistakes. The value of the variable will increase by 1 every time the user makes a mistake, or more specifically, every time the hook touches the main wire. For this, we will use the block

from the category Variables.

We will drag this block into the part of the code in which we have detected a mistake by displaying the X sign. 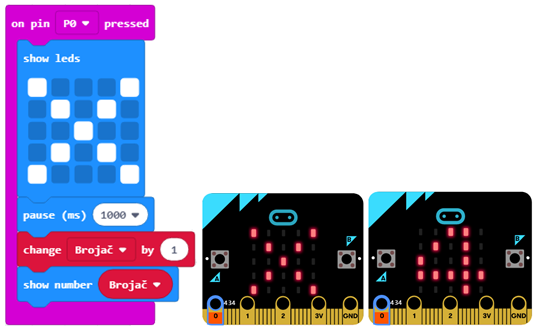 In our next step, we want to upgrade the project by adding the sound every time the user touches the main wire.

. Any number can be chosen. We will leave 1 as the ID of the group. We will then drag this block into the block

Part of the code, which creates the communication group:

To send a radio signal to another device, which will “react” based on that by emitting the sound when a mistake is made, we have to introduce the following block, into the section of the code that detects and counts mistakes. 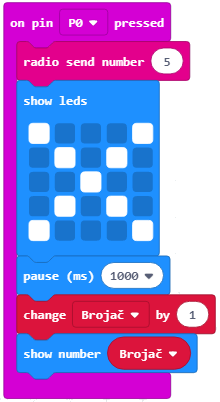 The completed code for the first Micro:bit: 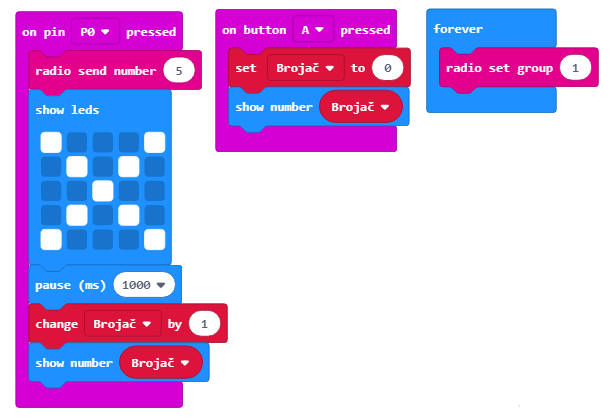 Our next step is to create the program for the other Micro:bit, which will control the sound every time the user makes a mistake. Our two Micro:bits should communicate in the space with the ID group 1.

We drag the block

Part of the code, which creates the communication group:

Next step is for this Micro:bit to receive the information (in our case a number) based on which it will “react” by emitting a sound. For this, we will drag the following block from the

Into this block, we will drag the block

, which reproduces the sound, from the category

. From the drop-down list of this block, we will choose the tone and the duration of the tone.

The look of the code, which reproduces the sound:

Note: To reproduce the sound, Micro:bit has to be connected to the speakers or to the headphones in the following manner: 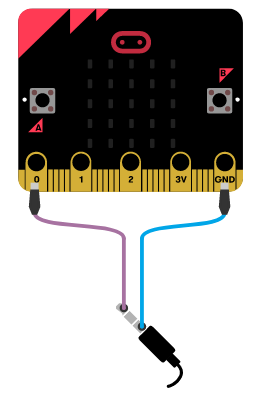 The complete code for the Micro:bit, which has the sound activated: 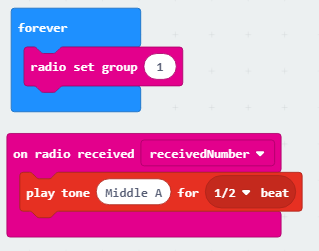 In this way, we have created detection, counting and sound of the mistakes made by the user when the main wire is touched.

To create the device, which will measure how much time the user needs to complete the “exercise” of his motor skills, we have to introduce two additional Micro:bit devices. One will only be a “trigger” starting the clock on the other Micro:bit.

By clicking button A, the device is reset, and the screen is cleared. The reset option is located in the category Advanced - Control.

Part of the code: 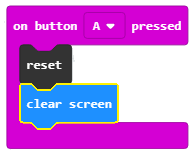 Then we create the space for communication with the ID group 50:

Pin P1 is the pin the hook is connected to via the crocodile clips. This pin will be used as the time “trigger”. More precisely, the hook touching the wire sends a radio signal, which starts the time. Furthermore, to enable the user to see when the time started, the image

will be displayed on the screen of the Micro:bit.

The completed code for the Micro:bit, which signals the start of measuring time. 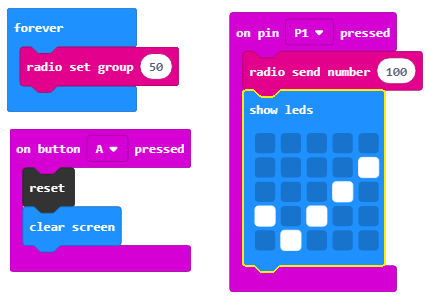 We need to define two variables:

Clicking on button A resets the device and sets the initial values of the variables Time and Counter. Values for the variable Counter can be found in the category 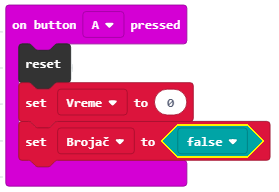 The next step is to create the space for communication with the ID group 50:

The P1 pin is the pin the hook is connected to via the crocodile clips. This pin will be used as the time “trigger”: 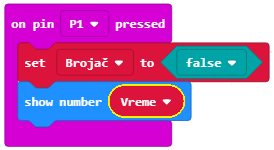 When the user clicks button B, the time it took for the user to complete the “exercise” will be displayed:

When the Micro:bit accepts the radio signal (number) from the other Micro:bit device, the clock starts and the value of the variable Time changes by 1, after every second until the end of the “exercise”: 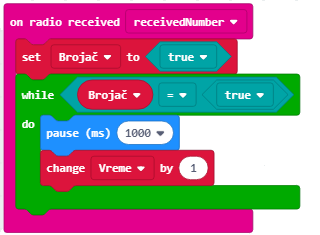 The completed code for the Micro:bit, which measures the time from the beginning of the “game”: 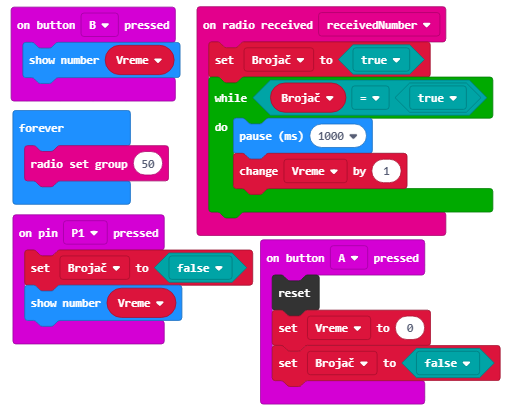 When you have transferred all of these codes to your Micro:bits, you will be ready to “test” your motor skills and begin to “exercise” your weaker hand.