Basic structure of a PyGame program¶

When you want to run the program in your local development environment (e.g. IDLE), copy the program to your editor, save it to your computer, and then copy the petljapg module to where you saved your program. After that, you can refine and modify the program as you like, save different versions of the program, and try them out by running the program.

Here’s what a PyGame program that draws one slanted line segment and waits for the user to close the window looks like.

Let’s go through the statements of this program in order to explain in more detail what they do.

First we have a group of statements that will need to appear at the beginning of each program:

The following is a group of statements that is different in each program and determines what that particular program actually does. Our first program draws a black line on a white background, and it was achieved through this part of the program:

Statements like this will soon be explained in detail, but if you feel impatient, you can try modifying the parameter values in the program or adding new, similar statements and discover for yourself how these drawing functions work.

At the end of the program, we call another function from the petljapg module: petljapg.wait_loop(). This function contains statements that allow the drawing to appear in the window and keep the window open until the user clicks on the close button. After closing the window, the function deactivates all used parts of the PyGame library (turns them off).

All our PyGame programs will end with a call of the petljapg.wait_loop() function or some function similar to it. After executing this function, the program can continue to run without the PyGame library in a text window if required.

Coordinates are a very important term for us and we will encounter them in just about every PyGame program. The position of all objects (points, line segments, circles, text, imported images, etc.) in the window is determined by their coordinates in the coordinate system of the window.

The coordinate system of a window is similar, but still slightly different from the one used in mathematics. The position of a point is determined by an ordered pair of its coordinates in this case as well (coordinate x, i.e. abscissa and coordinate y, i.e. ordinate). The unit of measurement is one pixel. 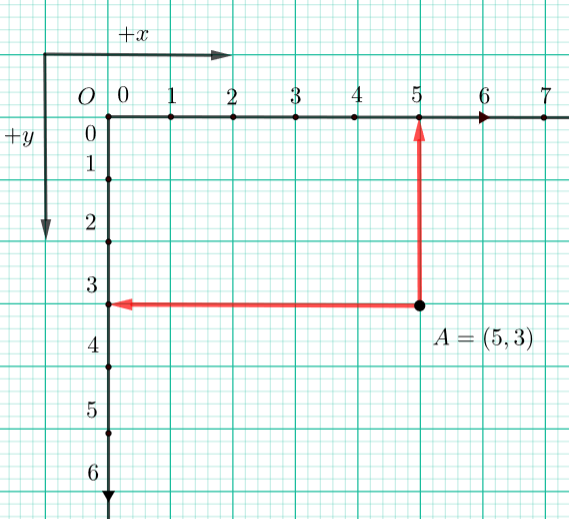 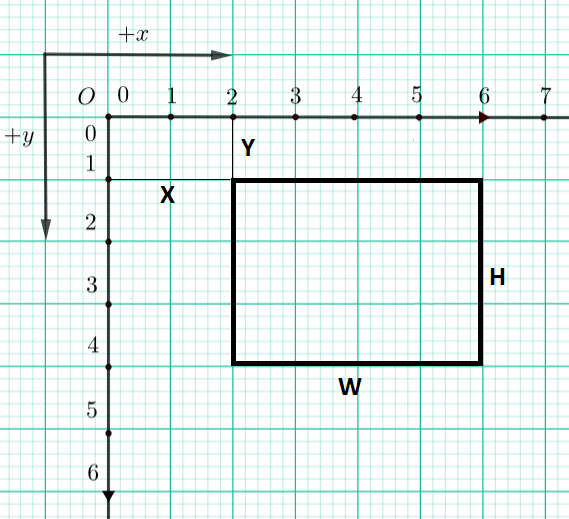 The following program can help you understand the coordinates. Launch the program by clicking on the “Play task” button, then move your mouse and watch as the coordinates change. The window the mouse is moving in is 300 times 300 pixels in size. The values of the x and y coordinates appear both in the window title bar and next to the mouse pointer. The notation that appears next to the pointer is in the form of an ordered pair, as it will be in the programs when we specify a single point.

Test your knowledge of coordinates through the following few questions. 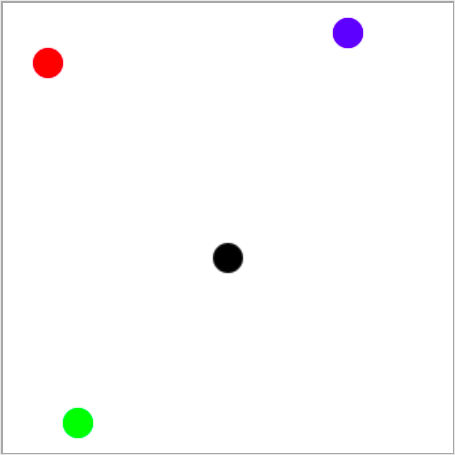 Link the color of the circle to the coordinates of its center (the window dimensions are 300 times 300 pixels). Try again!

If the window is 200 pixels wide and 300 pixels high, what are the coordinates of its center point (write the result as an ordered pair)?

If the width of a window is `w` and the height is`h`, pair the corners of the screen with their coordinates. Try again!

Of course, when drawing, different colors can be used. We can specify a color by its name (in English), which we forward as a parameter to the pg.Color function. You can use colors by forwarding the appropriate string: 'black' for black, 'white' for white, 'gray' for gray, 'blue' for blue, 'green' for green, 'orange' for orange, 'yellow' for yellow, etc. Recall that stings are specified either between single or double quotes (e.g. ‘blue’ and “blue” can be used interchangeably). For example, if you call function py.draw.line(canvas, pg.Color('blue'), (0, 0), (200, 200), 3) a blue line segment, 3 pixels wide, whose end points’ coordinates are \((0, 0)\) and \((200, 200)\) will appear in the window

Some of the color names commonly used in programs are:

Play around with the colors in the following program and try to paint the window in some or all of these colors.

One of the mistakes that is often made when writing the first PyGame programs is to write pg.color in lowercase when specifying a color, instead of capitalizing - pg.Color. This causes an error with the message AttributeError: '' object has no attribute 'color'.

Another common mistake is not to specify the color name under quotation marks (for example, to specify pg.Color (white)). Then the error shows NameError: name 'white' is not defined on line 8 message.

In addition to these colors, there are many others you can use. The total number of colors that exist in computers is huge, amounting to about 16 million. Out of these, we can only name a little over 600 different colors (the complete list is in the colordict.py file, which you can easily find on the Internet, and if you have PyGame installed, you have it on your computer as well).

We can specify all these named colors, as well as all the others that have no names, using numbers. The so-called RGB color model is the most used for this. Namely, in computer graphics, each color is obtained by mixing a certain amount of red, green and blue, by whose names the RGB model is named. For example, combining red and green lights produces a yellow light, combining red and blue produces magenta, and combining blue and green produces cyan. Combining light of all three primary colors results in white light, while black light is obtained when all three lights are off. Gray light is obtained by mixing equal amounts of red, green and blue light. 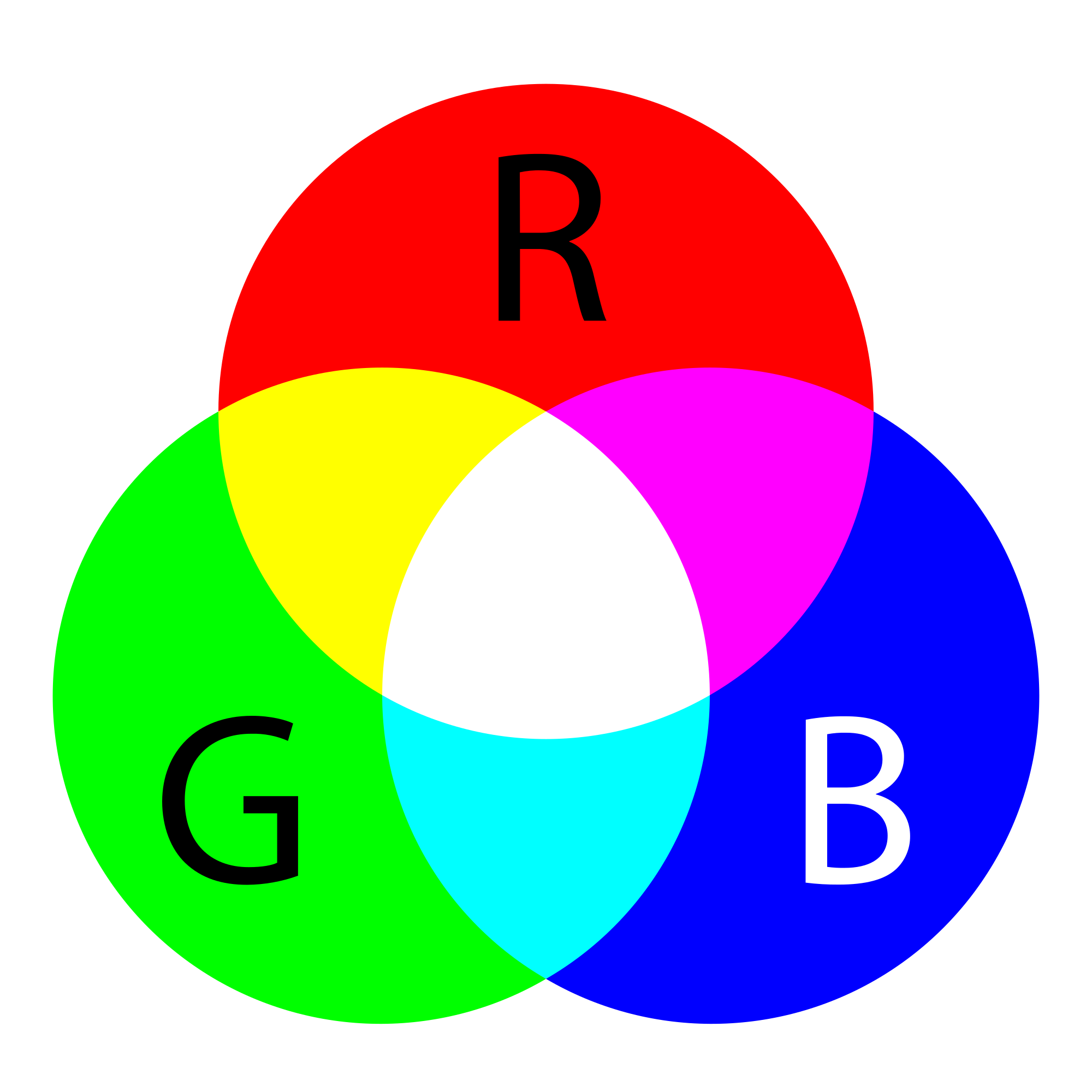 This means we can describe a color by specifying three numbers (in this case, numbers from 0 to 255), which represent the amount of red, green and blue colored light, respectively, in the color we are defining. In the Python programming language, color can also be represented in the form of a three-element ordered tuple (e.g. (123, 80, 56)), or a three-element list (e.g. [123, 80, 56]). You can specify the tuple or list directly as the color argument of a function, or you can store it in a variable and use the variable name later. For example, by assigning CYAN = (0, 255, 255), we define the cyan color by specifying the appropriate amounts of red, green and blue light contained in this color (since it is a mixture of blue and green there is no red at all, and blue and green components are at maximum). After that, we can use this color in a function call as well (for example, canvas.fill(CYAN)). The names of these variables do not have to be capitalized, but this has become common practice in writing Python programs. In the programs you will see below, you will encounter definitions like this.

A color can also be specified with four numbers, for example CYAN = (0, 255, 255, 10). The last, fourth parameter (also in range from 0 to 255) determines the color’s transparency, i.e. the cyan color given in this way is slightly transparent.

Let’s now summarize the RGB values of some common colors.

Notice that the shades of gray are recognizable in that the amounts of red, green and blue are equal in them. The smaller the amount, the darker the shade, and vice versa - greater equal amounts of red, green and blue represent lighter shades of gray (based on the RGB value, black and white can be seen as the darkest and the lightest shade of gray).

In the following program, you can also try specifying colors in the RGB format. In addition to coloring the window in some or all of the colors listed, you can enter (any) other triples of values between 0 and 255.

When choosing the colors you want to use in your programs, a color picker tool may help you. There is a tool like that on many sites (search for color picker), or you could use the one from the Paint application. You can try it now - choose a color and copy the R, G, B values to the program.

Establish your knowledge of colors by answering the following few questions.

Q-46: Which of the following colors is a shade of gray?

Q-47: What colors are mixed to produce a purple (magenta) color?

So, the colors are represented by three and the coordinates of the points by two numbers. Check if you understand this by answering the following question.

pair the colors and the coordinates if the screen is 300 pixels wide and 200 pixels high. Try again!